Goldilocks and the 4 Bears 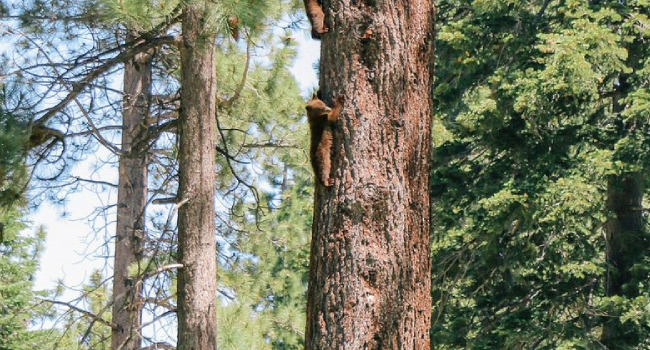 My family owns a cabin on a small lake called Fallen Leaf Lake, in South Lake Tahoe. This home as been in my family for nearly a century, having been built by my great grandfather Leslie (ironic, I know.). Now, this article isn’t about our cabin… but if you’d like to read about it, it’s next on the list of blog articles. This post talks about some fun furry friends we met on a hiking trip with our own furry friends.

I had taken advantage of my company’s work from home policy and planned on spending the greater half of my week up at the cabin. Both of my parents and my little sister were up there, as well as our 3 golden retrievers. Two of them (Tanner & Kai) belong to my parents, and our newest addition is Leo, my little sister Maddy’s six month old puppy.

Later in the week Maddy and my dad left to go apartment hunting in LA, since my sister was just accepted into USC’s Master Program for Social Work–woohoo! So they left all 3 pups with me and my mom.

Having gone up to this lake every summer since I was born–and a similar legacy for my mom–we decided to go for a quick walk around the northern end of the lake with the dogs. We knew this trail like the back of our hand.

We leashed up the dogs, hopped in the car and headed to the trailhead.

Being the dog people we are, we like to let our pups roam free on trails since they never get the opportunity to be off leash in the city. So we released the beasts. We started walking the trail with Tanner, Kai and Leo each taking turns to run into the bushes, up the path, or simply lie down and eat grass. They were loving it!

We made a left at a fork in the road and continued into a meadow. The trees were beautiful, tall, and rose up in clumps around us. Our trail was fairly quiet and we didn’t encounter folks for a few minutes. As we passed a clump of trees Tanner took off running, sniffing and jumping excitedly at a smell he found at the base of a large tree. Within a few seconds Kai ran over to that spot and was anxiously pawing the ground as well. This is when our red flag went up. Kai, the loveable, lazy dog that he is, doesn’t move unless absolutely necessary–or if food is involved. We started to call them back fearful they’d found a porcupine or some dead animal, and we’d already taken Tanner to the vet with a face full of porcupine quills a few years earlier and none of us was keen to repeat the experience.

In a surprising turn of events the dogs listened and started our way.

That’s when I looked up. And there it was. Only 15 feet away from us, clinging to the tree above where the dogs had been investigating, was teenage bear cub. Luckily these are California Golden Bears, and aren’t violent unless provoked. However, this one was young enough to be considered a cub. And if you’ve know anything about bears you know that where there is a cub, there is also a mom, and she will do anything to protect her babies. We grabbed the dogs, leashed them and basically sprinted away from the bear in the hopes that Momma was nowhere near.

Once we made it a bit further down the trail towards a more populated camping area and where the trail touched the water, we felt a bit better about letting the dogs off the leash again. Surely no bears would be this close to a heavily populated campsite at 2:00PM.

We hung out near the water for a while, throwing sticks for the dogs, and getting sprayed when the dogs shook themselves dry.

We slowly made our way down the beach, wandering around folks gathered to play in the water and onto the next part of the trail.

Once again, Tanner took off running.

Leo tried to accompany him but couldn’t make it over the large log blocking his path. Grabbing him, and shoving him at my mom to leash, I ran after Tanner.

It wasn’t a porcupine.

Tanner was running directly at ANOTHER bear. And this time it was a Momma Bear. She was encouraging her 2 babies to climb into a nearby tree for protection. As Tanner ran up to her barking wildly, she whipped around and stopped, staring at him, daring him to come any closer. Tanner and this bear stared each other down for a few seconds, only 15 feet apart. I finally came to my senses and stopped running, only about 40 feet from the two animals.

In that moment I realized 2 things. 1) How much I love my stupid dog and 2) How quickly I’d sacrifice him if that bear charged. Fight or flight, baby, it’s real thing–and I was only in flight mode. I know it’s sad, and I’d never willingly sacrifice a dog, but why is it that some dogs are wired to walk (run) directly into death’s arms? You’d think 50 porcupine quills to the face would have taught Tanner not to go poking around with animals he doesn’t understand. But no…

Finally after screaming myself hoarse trying to call Tanner back towards me, he realized that he couldn’t defeat this bear and probably shouldn’t try. He came quickly back towards me, where I shoved him roughly over the log and re-leashed him with a few harsh words and sharp smacks to his nose.

We stayed and watched the bears from a safe(r) distance. The babies climbed back down the tree, staying close to their Mom, and slowly started making their way off into the forest. They crossed a rather large trail in the process and you could hear dogs sounding the alarm in the distance as the bears traveled away.

Deciding it wasn’t worth it to try our luck a 3rd time with the dogs off leash, we called it a day and quickly walked back to the car, only stopping to warn fellow hikers about the bears.

All 3 dogs are happy and healthy, and I’m 99% sure if we saw another bear Tanner would do the exact same thing again. But we love them!